The Wijk aan Zee grandmaster tournament — which used to be an adequate nomenclature until corporate sponsor Tata Steel said it wasn’t — is nearing the halfway mark.

18-year-old Nodirbek Abdusattorov, who’s been a grandmaster for five years already, leads the Masters division with 4 out of 5. Abdusattorov won with the black pieces against washed-up old man Magnus Carlsen yesterday, who’s near the bottom with 2 points.

Most other times, the Challengers division with an average player rating of 2580 would be the strongest tournament in the world. With 2 out of 5, Dutch international master Eline Roeberts is tied for 10th place among the field of 14 Challengers. She’s the lowest-rated player in the group — host countries benefit from hosting by furnishing their rising players with top-flight competition.

Roebers, 16, was the sensation of last year’s olympiad, winning her first eight games on board one for the Netherlands team. She won the silver medal, losing only to gold medalist Pia Cramling of Sweden. Roebers got all the attention, but you might say grandmaster Cramling was an even more incredible story for winning gold at the age of 58.

Roebers let a win get away from her against IM Beerdsen in round 5. In a near-overwhelming position at move 19, Roebers used almost all of her clock time — it’s easy to get bogged down with multiple winning continuations, which is why Purdy recommended that when your position is hopeless, give your opponent more than one way to finish — then played the rest of the game “on the increment”.

Some players become addicted to time pressure. They might make one or two incredible saves with flags up (so to speak; chess clocks don’t have flags anymore), which they enjoy so much that they try to re-create that rush again and again. In the newfangled time controls that increment a player’s clock with n seconds per move, time pressure addicts can play in time trouble indefinitely. 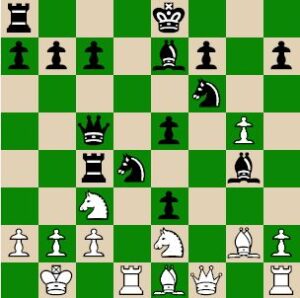