I’ve won the $80 prize in the top quad twice in a row because the average rating of my six opponents was around 1500. The Berkeley Chess Center invites you to make it harder for me nex time.

The cash prize is nice for gasoline and parking meters, but the first opportunity to play my novel Double Bishops’ Gambit over the board — it’s Christmas!

My opponent was Tom Boyd, a friend from way, way back. (Most weirdly, he was also my first OTB opponent for 1. e4 e5 2. f4 exf4 3. h4.) In the ’70s, Tom organized tournaments in Sonoma County, one of which he named after his daughter born around that time. Cynthia Ann never took an interest in chess, Tom said. 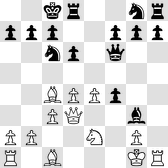