Vera Menchik (1906-1944) won the world championship every time she competed for it. Between 1929 and 1939, Menchik won the round-robin tournament seven times, winning 78 games, losing one, drawing four. Menchik was so dominant that the other world champion, Alekhine, said “it is totally unfair to persuade a player of an acknowledged superclass like [Menchik] to defend her title year after year in tournaments composed of very inferior players.”
Not to mention that FIDE conducted the women’s championship alongside the Olympiad. Take 1933, for instance: Menchik won the women’s tournament 14-0-0, while Czechoslovakia won silver in the Olympiad. Against the men who played boards #2-4 for Czechoslovakia, Menchik was 4-1. Had the Czech federation the sense to put Menchik on their Olympiad team, that well could’ve been sufficient for gold.
Among the players Menchik defeated in her career: British champions Khan and Alexander, French champion Lazard, Dutch and world champion Euwe, American champion Reshevsky, Australian champion Steiner. 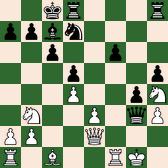