Any talented player must in his soul be an artist, and what could be dearer to his heart than the victory of the subtle forces of reason over crude material strength! — Bronstein

Broadly speaking, we consider three positional factors while forming a plan: force, time, and space. In other words: material, development, and structure (plus the piece mobility within), while threats and safety take precedence as they do.
Given any position, when the question comes “which is most important?”, the answer is: It depends.
These days, unfortunately, material carries excessive weight, so to speak. This is for a couple of reasons:

:
Cars, furniture, canned goods, whatever. If you ask adults if they’d trade the silverware for a few days of vacation, they’d agree in a heartbeat.
The weirdest thing about these same adults is that they won’t make this deal on the chessboard, afraid to give up a pawn for space to breathe and time in which to do so.
Kids overemphasize material values at the chessboard, especially pawns. Saddled with terrible coaches teaching “pawns = points”, and parents living “he who dies with the most toys win”, kids see the object of the game as capturing as much enemy material as they can, then queening every pawn left on their side.
There are no points at the chessboard. It’s not basketball. Kids who learn that capturing material is some form of scoring at a chess game get off to a terrible start in what’s supposed to be an artful — as much as sporting — endeavor.
Poor coaches say “the kids have to start somewhere”, but “pawn = point” is a start toward “bean counter”, not “chessplayer”. It’s just as easy to start them at “form a checkmate”.
The pawns’ job on the chessboard is to create maneuvering room for the pieces, either by defining physical space, or getting out of the way by being captured (it’s the suicidal pawns that are most dangerous, said a wise elder at my childhood chess club).
Materialistic players have it backward: capturing a pawn doesn’t gain a point, it gives time and space to the opponent.

This was the game that inspired my affection for the King’s Gambit. 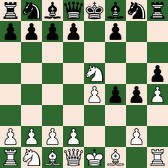