I read that Carlsen has been playing it — that ought to be interesting, because the theory goes 30 moves deep, but Carlsen doesn’t care about theory. He just plays good moves, which could turn the theory upside down.
Sometimes the names are just plucked from midair, counterproductively. Queen Pawn Countergambit was a perfectly descriptive name for 1. e4 e5 2. Nf3 d5, until someone named it the Elephant Gambit, which stuck, for no good reason.
My favorite 1. d4 Nf6 2. g4 has too many names. Most call it the Gibbins-Weidenhagen Gambit, though Gibbins was a postal player with no record of playing it, and no one knows who Weidenhagen even was. Humphrey Bogart won at least one very nice game with 1. d4 Nf6 2. g4 while he toiled as a Southern California chess organizer between roles in Golden Age movies; some call it the Bogart Gambit. Others call it the Bullfrog, I dunno why or when. I prefer calling it the Bronstein Gambit since he played it against another grandmaster (and drew).
The dumbest name attached to 1. d4 Nf6 2. g4 is Delayed Grob — this is stupid, because 1. g4 (the Grob proper) Nf6 2. d4 would never happen (White would play 2. g5 to chase the knight from its watch of e4).
There’s no logic that links 1. d4 Nf6 2. g4 to the Grob except for the move g2-g4 — in fact, the fundamental ideas in the 1. g4 opening and 1. d4 Nf6 2. g4 gambit are contrary: 1. g4 is smarter than it looks. 1. g4 goes ahead of Bf1-g2 and c2-c4 to hit a black pawn on d5, and let’s say White succeeds in knocking down the d5-pawn. Then the g4-pawn has the job of wiping out a black pawn on f5, after which e4 becomes a glorious outpost for a knight.
The 1. d4 Nf6 2. g4 Nxg4 3. e4 gambit, on the other hand, is designed solely to put a pawn on e4, not a knight.
About 1. e4 e5 2. f4 Nc6 3. Nf3 f5: The German grandmaster Wahls says he’s the third player in history to try it, and after the late English GM Miles named it “Adelaide Gambit” (for an Australian friend of his, in New in Chess, no. 36, 1995), Wahls responded two issues later with 100 pages of analysis he did in college — instead of studying. (Kids: college is the best time of your life, don’t waste it on chess.)
If you consult databases, they all attribute 3…f5 to Miles, whose involvement is limited to some published analysis (probably because everyone readily believes Miles would invent something that weird — given Miles once beat Karpov with 1…e4 a6, weird only in move order, really).       That was against a higher-rated player. After Stockfish ruined that one, I didn’t want to look at the game against a lower-rated player. 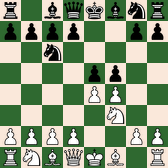