Since you’re reading this, I reckon you’ve seen the Netflix series “The Queen’s Gambit”, the #1 TV show in the nation, and carrying a 100% rating at Rotten Tomatoes.
I hold that its universal appeal is because non-chessplayers don’t know about chess, while chessplayers don’t know enough about storytelling. Even so, among the small group of chessplayers I know who have backgrounds in visual storytelling, none gave “The Queen’s Gambit” less than a B+.
One of “The Queen’s Gambit’s” chess-games–as-Easter-eggs is most unbelievable. At the end of Beth Harmon’s blitz simul, they want us to buy her win against ex-US champion Benny Watts is a duplicate of one of the best-known games in history, Morphy-Duke of Brunswick and Count Isouard, Paris 1858.
I like to joke that one’s membership in the Chess Teachers’ Guild is revoked unless one shares this game at least once a year. I think less and less of the moves within the game, but the accompanying legend is as shiny as ever.
After 19-year-old Paul Morphy won the First American Chess Congress — the first US championship, in essence — he toured Europe, with the plan that winning a match against Staunton (one of the leading European players) would give him some claim as the best player in the world. Why not, Morphy still had about a year to kill until he was old enough to apply to the Louisiana bar.
Europe loved Morphy, a well-mannered and well-heeled young chap. He played a blindfold exhibition here, blasted masters there, and was feted wherever he want.
Though Staunton kept finding reasons of work, illness, or dead goldfish to beg off a match — Staunton had excellent professional standing as scholar and as chess master, which he didn’t want to risk. He really shouldn’t have been agreeable to the idea of meeting Morphy in the first place.
The European chess cognoscenti and entitled folk took Morphy to the best restaurants and venues. The story about this game goes that Charles II — the Duke of Brunswick 1815-1830 — and the Count Isouard of Vauvenargue (somewhere in southern France; Picasso is buried there) took Morphy to see Rossini’s “The Barber of Seville” at the Paris opera house one night in 1858 (there’s some disagreement over that; it’s also reported that it was Bellini’s “Norma” playing that night).
The duke and the count unfold a pocket set, and asked Morphy for a game. Dudes, Morphy said, the wind players are getting in tune, the string players are rosining their bows, the fat lady is ready to sing, there’s no time for chess. Hey, man, they said, we took you places; you have to play chess with us. OK, said Morphy, let’s make it quick. I’m pretty sure that’s exactly how the conversation went. 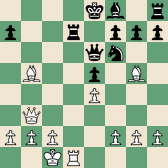