I thought to resume here so I could say I maintain two blogs that no one reads. Where were we?

The King’s Gambit was mentioned in chess literature before 1500, a landmark like the Ruy Lopez and Queen’s Gambit, but nowhere near the same level of respect.

The reason for that is that 2. f4 is a nothing move in terms of immediate impact. 2. f4 doesn’t help development, doesn’t truly threaten, and weakens the white king position. Looking at it that way, 2. f4 is plain bad. Prefer to think of 2. f4 as a speculative, volatile investment.

Achieving an advantage in material, and threatening the powerful check 3…Qh4+. When that check comes, White avails of all three methods of getting out of check.

Interposition — For White to prepare 4. g2-g3 as a helpful interposition, he plays Breyer’s Gambit: 3. Qf3 Qh4+ 4. g3 fxg3 5. hxg3, when the h1-rook is guarded. Euwe once won a charmer this way, but this branch sours 2. f4 as an investment that can’t be recouped materially. White desires to play d2-d4 without fear of capture, then Bc1xf4 to balance the material with interest gained in center influence.

Flight — Steinitz thumbed his nose at opponents with 3. d4 (similarly, Keres played 3. Nc3) by fleeing 2…Qh4+ with 3. Ke2, but Steinitz was bonkers. Blocking the queen and Bishop from development meant an additional king move was in order, and Steinitz didn’t shy from Ke2-e3. The Bishop’s Gambit 1. e4 e5 2. f4 exf4 3. Bc4 opens f1 as a safer flight square. 3. Bc4 was Polgar’s choice; its drawback is blocking the h1-rook’s development.

Then 4. h4 should be played, to disrupt the black pawn pair before Black bolsters it with …h7-h6. (4. Bc4 is equally good for developing a piece, though undermining the g5-pawn becomes burdensome.)

Black has no good alternative to 4…g4. Then the white knight can sacrifice itself by 5. Ng5 h6 6. Nxf7. If Allgaier’s knight sacrifice feels too dicey, then there’s Kieseritzky’s more measured 6. Ne5.

Black has several viable choices at move 6. One of Morphy’s exhibition opponents opted to kick the knight with 6…d6.

I think this is Morphy’s most instructive game. They revoke your membership in the chess teachers’ guild if you’re not high on the Paris opera house game, but this one is simpler to explain and understand, and reinforces Purdy’s two main instructions: Examine every attacking move, and Use inactive force.

If you’re with me so far, White’s two headaches in the King’s Gambit Accepted are:

There’s another third move option for White that accounts for both of those defensive resources, and it’s not in the books! 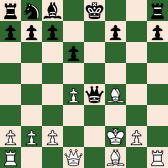