Cecil Purdy doesn’t get the credit he deserves as the greatest chess teacher ever for inexpert players. One reason is his unusual choices of words, some that don’t resonate with American readers.
Another reason is his understated manner. When Purdy said: “You cannot play this game passably well until you recognize each of your opponent’s threats, and the unreality of their unreal threats”, both of those reasons were in play.
The words “unreality of unreal threats” draw blank stares, and where Purdy said “passably well”, another teacher might have hyped “2200 level”. What if Purdy said: “You can’t play chess at a 2200 level until you’re unafraid of ghosts, and ensure that your own attacking moves aren’t phantoms”?.
Bad chess teachers instill fear in their students. When the opponents attack, they say defend, guard, run, hide! These are the chess teachers who think counting captured pieces is the thing, whose students are forbidden to let an attacked unit stand. Defending yourself is the last thing to do when the enemy makes a move that looks menacing. The first thing to do is nothing at all.
Imagine passing your turn, and letting your opponent move again to carry out the sinister plot. If you can see that the execution of the so-called threat doesn’t really hurt you, you get the best gift a chessplayer can receive: a free and unhindered choice of moves.
Similarly, when you are contemplating a threatening move of your own, imagine the opponent passing his turn, and you get another. If your threat is bogus, that’s the chance for your opponent to steal the initiative.
When the Deep Blue computer was on its way to beating Kasparov in an unofficial chess-world-is-not-coming-toan-end match, one of the best programming improvements made by the IBM team was the “null move”.
The “null move” enabled Deep Blue to evaluate positions as if one foregoes a move. When Deep Blue’s opponent moved, the computer gave itself a nothing, “null” move, and calculated from there. Deep Blue was the first computer to defeat a world champion, and a critical step its programmers took was — essentially — implementing Purdy’s advice as code.
The 23rd and final game of the 1909 CapablancaMarshall match pushed me to understand Purdy’s instruction to “recognize the unreality of their unreal threats”.
When I was young, I guessed Capablanca’s moves to that game, and at move 15, I guessed to keep the b7-pawn. Ten years later, I guessed to safeguard the b7-pawn again. Another 10 years passed, and the powerful nonchalance in 15…O-O! began to make sense.
The most valuable commodity for the chessplayer is the move. If you defend against an unreal threat, you’re losing two moves: the one used to ward off a ghost, and the one your opponent might discover. Worse still is a prophylactic move to stop an unreal threatening move!

Whatever your potential as a chessplayer, you will not reach it unless you — as Cecil Purdy said — use inactive force, examine every threatening move, and recognize the unreality of their unreal threats. 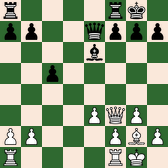