My chess teacher said long ago why the finest master-class games can appear uninteresting: Because the brilliancies are in the notes.
The immortal games that masters produce in simultaneous exhibitions don’t happen against other masters, who see it coming. One sparkling combination after another might be embedded in the moves, but to see the beauty in many master games, you have to dig.
For that reason, my best accomplishment in a long life of chess is unearthing a checkmating pattern in Capablanca’s games that went unseen for 100 years, though the checkmate didn’t arise on the board — it was in the analysis of paths not taken.
My second book — Capablanca: A Primer of Checkmate — doesn’t sell very well. It’s hard to find a chessplayer who doesn’t already have two or five Capablanca books in the library, who needs another. And my book is meant to augment The Art of the Checkmate by Renaud and Kahn and Capablanca’s Best Chess Endings by Chernev. Those books are written for inexpert players, and experts don’t buy them (ask a chessplayer which teacher writes the most useful books, and they’ll say ‘Dvoretsky’; Dvoretsky taught masters to be grandmasters, selling more books than Purdy, who taught club players to be club champions).
Renaud and Kahn did an invaluable service for students by identifying and categorizing checkmating patterns. Some patterns they named, like Morphy’s Mate and Boden’s Mate. To their array of checkmate patterns, I added Capablanca’s Mate:

It’s a pleasing little checkmate; the rook checks and covers the second rank, while the knight fills in the holes beside the king. Assuming you can find a way to cover the rook:

When I see Capablanca’s Mate forming in my games, I think ‘ooh, I hope this happens organically’, because one shouldn’t contrive these things.
Bridge students do this all the time. After improving bridge players learn the mechanics of “the squeeze” (like a double threat on the chessboard: one (sometimes both) defender guards two threats, but is forced to relinquish a guard because the rules say one has to play a card — like the double threat at chess causes the opponent to want to make two moves, but the rules say there must be only one), they look for them on every hand. 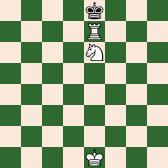