Grandmaster Irina Krush won the US women’s chess championship conducted online Oct. 21-24. It was Krush’s eighth national championship, a feat that hasn’t been accomplished since 1967 by Fischer.
How weird is it that there’s a generation of American chessplayers that’s never heard of Fischer.
The millenials, many of whom are children of boomers, mostly remember Fischer as a loon whose xenophobia extended to Americans. To milennials, Fischer isn’t an American (Dubya was in office when Fischer spit on the US treasury’s order against his playing in Yugoslavia — not the best climate for ‘Bobby being Bobby’.), pretty much non-existent in the history passed to their children, Generation Z. 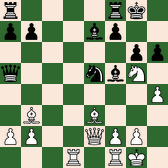