The 18th Holly Heisman Memorial charity tournament goes on this weekend, games played on chess.com instead of its usual Pennsylvania. Donations and entry fees benefit the The Philadelphia Foundation, assisting women in need.
NM Dan Heisman is successful and experienced chess teacher. Media personality Howard Stern was a Heisman student; my Morphy book was part of Stern’s homework, which I think warranted an invitation to guest on his radio show.
Heisman is a prolific writer. His ‘Novice Nook’ column helped me, especially his outstanding “Guide to P-R3”. Bad chessplayers play P-R3 when they can’t think of anything to do, thinking such a little pawn move can’t hurt. Kids like to play P-R3 when there’s an enemy piece on N5, and call it an ‘attacking move’ because that’s what their chess teachers want. It isn’t really an attacking move, though playing P-R3 to annoy an enemy piece is usually better than playing P-R3 to prevent an enemy piece from landing on N5 (which is what adult club players do when they think they’re capable of masterly prophylactic moves). Heisman’s piece on P-R3 makes sense of when to play and not play P-R3; I think it’s a must for inexpert players.
Heisman played this game against American champion Walter Browne while Heisman was in college in his early 20s, and Browne was a rising young American/Australian grandmaster (the dual citizenship saved him from the Selective Service and Vietnam, enabling Browne to gain international expeience in his late teens). 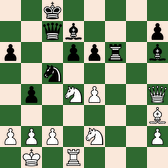