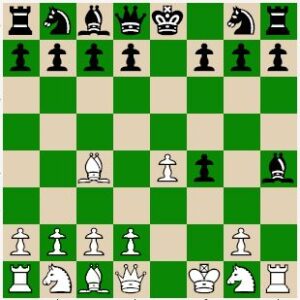 That’s what we should expect — for 3…d5 to put a silly move like 3. h4 out of business — but that’s not how average chessplayers think. Average chessplayers react to 3. h4 like Lyttelton did against Morphy, and play 3…Be7 to threaten the pawn.

Which brings us to the final exam question: If White could make another move here, what should White play?

Each time I mentioned Scholar’s Mate in this series of blog entries, I told you ‘this will be on the exam’. So you saw 6. Qh5, right?

Here’s the shocker. 14 opponents enabled that fork. I think it’s howlingly funny, that in a world of chessplayers who think opening study is useful, 14 of 58 missed a fork where half the point is Scholar’s Mate. Two opponents played 5…Nf6, dropping the bishop to 6. Rxh4.

In other words, even with best play by Black in the Double Bishops’ Gambit Accepted — chasing the pawn with 3…Be7, then capturing by 4…Bxh4+ — White can reach a playable middlegame.

This is a link to a PGN file with 58 Double Bishops’ Gambits Accepted.